The Outsider and Others by H.P. Lovecraft (Book Review) 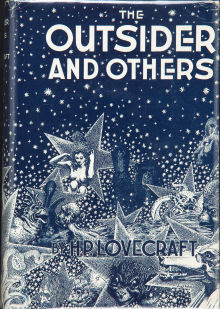 Considered to be one the greatest horror writers of the 20th century, H.P. Lovecraft, didn’t receive much acclaim until decades later following his death. Eventually when Lovecraft’s literary work started receiving cultural references this made him develop a cult-like status and in turn he had gained respect from horror writers of our time, including Stephen King and Neil Gaiman. After passing away in 1937 from intestinal cancer, two years later his book, The Outsider and Others, had been published.

Lovecraft was labeled by some to be a protégé to renowned author Edgar Allan Poe, since he too wrote science fiction/short horror stories just like his late idol. In fact, most of the short stories in The Outsider and Others were compared by critics to be very similar to Poe’s writing style because of the stories being a psychological thriller that contains elements of horror. The compilation novel has 37 short tales of horror. But there is one story in particular, The Outsider, that became one of Lovecraft‘s best short stories to date, which is why the book was given that title.

The story entails the narrator’s life as being miserable and lonely. He vaguely remembers anything about his life story, or what lead him to the situation that he was in, being alone in a decaying castle that feels like a prison to him. The story focuses more on his dreary environment and how he has never seen light, nor any other humans. He only knew about the outside world from the many books he reads. After being in isolation from society for many years, he one day decides to break free from his rut and explore the outside world. It is through his efforts to search for human contact (by escaping his depressing life to start a new one) that he discovers something about himself that makes him feel even more alone.

When the narrator goes on a journey to discover new surroundings, he comes across another castle where a party is being held. Eager to come into contact with people, he climbs into the castle through a window. However, when people see him they are terrified; some cover their eyes as they frantically try to run away from him. It is not until the narrator views his reflection in a mirror that is when he is finally aware of his “abnormal” appearance. In sorrow, the narrator tries to return back to his castle but is physically unable to go back. He now becomes an outsider, not only from his old way of life but the new way of life he was seeking.

What made this story so memorable is not just the typical elements that you would find in gothic literature, but it covers a social issue that most people subconsciously have to deal with-- having a distorted image of oneself. Some believe that Lovecraft wrote this story based on his own assumption of himself as being ugly. In fact, his own mother told one person that she felt her son had a “hideous face.”

Just like the narrator’s view of seeing himself as hideous to outsiders, many suffer from self-consciousness, which leads them to living an isolated life. But some take drastic steps by altering their body through plastic surgery. It has been reported by the American Society of Plastic Surgeons that in the U.S. alone, more than 14.6 million cosmetic surgeries were performed in 2012, a five percent increase from the year before. Yet, despite so many people undergoing plastic surgery having more than one procedure isn’t enough. Most patients keep returning to have more work done to alter their bodies. Feeling that if they alter one more facial feature or body part they will then be perfect. They chase an illusion of what is socially acceptable but are never satisfied with the results because it is in their mind that the distorted body image is occurring. This disease is best known as body image dissatisfaction. It can ruin a person’s self esteem and, not to mention, their relationship with others. Though some crave for social contact they fear of being shunned by society because their appearance doesn’t fit in with what people consider to be attractive.

Regardless of whether or not The Outsider was considered to be an autobiography of Lovecraft’s personal life; what can be taken away from this story is how people in our days suffering from body image dissatisfaction can learn from the narrator’s example and avoid isolating themselves from others. This can leave them at a standstill; in that they are not moving forward in their life, but rather being trapped in a life of inaction and loneliness. Aside from the various plot holes in the short story, it is still worth reading, as well as the other Gothic tales in The Outsider and Others.

Review Rating: Four out of Five