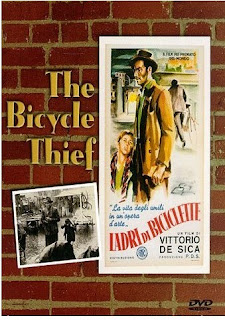 After World War II, there was a change in the way international filmmakers had interpreted story lines within movies. One of the most influential cinematic styles came from Italian films known as Neorealism. This cinematic art form had garnished a lot of attention from moviegoers from around the world because its story line dealt with realistic social issues that had affected those living in poverty, as they struggled to put their lives together after facing economic and social strife during the post war era. A film that made an exceptional example of Neorealism was the 1948 film, Ladri di Biciclette, which is based on a novel by the same name. When the film was released in America, the title of the movie was, The Bicycle Thief, which some have felt is an incorrect translation, but should have been titled, Bicycle Thieves. That is why some might see the film sold under the two different titles. Though people didn't agree on what the proper title should have been, they did however love the film. Just four years after its release, The Bicycle Thief was deemed one of the greatest films of all time, according to British film magazine, Sight & Sound's first ever international poll taken by filmmakers and critics. In 1949, The Bicycle Thief also won an Academy Honorary Award for Best Foreign Film.


The story is about a poor man named Antonio that is struggling to support his family after his country had been defeated in World War II. After the war ended, the country goes through poverty and unemployment. Antonio is offered a job that requires him to have a bicycle. Antonio and his family are excited about the possible income he'll make in the long run that will help his family very much. But on his first day of work his bike is stolen from him. Antonio and his young son, Bruno, search through the city of Rome to find the missing bike. The director of the film, Vittorio De Sica, shot the entire movie in Rome, Italy which at that time had been devastated by the effects of WWI. The streets were dirty and in shambles, so this setting had fit the story line more accurately. American producers offered millions of dollars to have actor, Cary Grant, play the lead role of Antonio. But the director rejected the offer and instead hired a real life factory worker (Lamberto Maggiorani) to play the role instead, and also hired other non-actors to play characters in the film as well. The principles of Neorealism are authenticity rather than pretense, earthiness rather than sparkle, the common man rather than the idol (Mast & Kawin, 2006).
Personally, I felt the director made the right choice because having a famous actor play the lead role would have been a distraction from the story line; because the film focuses not just on Antonio and his family facing difficulties but the entire city is facing the same poverty. As shown in the introduction of the film, many men, both young and old, are arguing with each other about who will get picked for the very few jobs that are available. Also, the film shows several scenes of people being crammed into buses so they could get to work; since having a bicycle was considered a luxury let alone having your own vehicle.
I noticed that after Antonio lost his bike it seemed like every shot showed rows of unattended bicycles. I guess it shows the irony of everyone else possessing what you no longer have. That is why in a moment of despair Antonio does the unthinkable and tries to steal another man's bike. Seeing the situation from Antonio's point of view, and the injustice he went through, it is understandable why he acted in such a way. All he wanted was get his bicycle back so he could financially support his family. We saw this similar example happened to people that lived near the gulf coast region that was devastated by hurricane Katrina in 2005. With little help from FEMA, citizens were doing the unthinkable and looting stores and houses. People justified their actions because they wanted to feed their families. It goes to show that when in a moment of despair the human mentality is survival of the fittest. The only negative part of The Bicycle Thief that viewers may not like is the film's unhappy ending, where Antonio and his son have no choice but to accept the loss of the bike and move on.
Even though the public's interest in Italian Neorealism was brief, from 1945 to 1953, this cinematic style has influenced film makers even in our days to captivate realism in their films without big budget. But instead focusing on story telling that's related to the lower working class that struggle to have the basic necessities in life that some of us might take for granted.
Reviewer's Rating: 4 1/2 out of 5