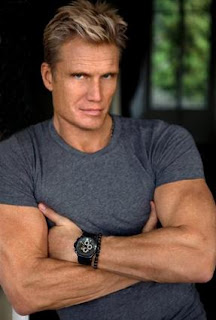 If you have never heard of Dolph Lundgren, clearly you haven’t watched enough action movies in your lifetime. Best known for starring in Rocky IV as the Russian contender, Ivan Drago, the former martial artist has continued to make a name for himself as an action star. He even portrayed action figure, He-Man, in the 1987 film, Masters of the Universe. However, around the late 90’s his career reached a rough patch after making a slew of straight to DVD films, but regained popularity after appearing in the action packed thriller, Expendables, in 2010.


Recently, the Swedish actor/director reprised his role as killing machine, Andrew Scott, in Universal Soldier:Day of Reckoning, which is the third installment to the Universal Soldier franchise. The trilogy was released last year to mark the 20 year anniversary of the film’s original release in 1992 and also stars another famous action star from the past, Jean-Claude Van Damme. TheCelebrityCafe.com chatted with Mr. Lundgren about his upcoming projects and why aging action stars are still relevant in Hollywood.


TheCelebrityCafe.com: Most of your memorable characters were villains. Do you prefer playing a bad guy or the hero?


Dolph Lundgren: When I play a villain I try to get the guy to be entertaining and enjoyable to the audience. It’s more fun to play a villain and a bit easier, actually, because there are few rules you have to stick by. With playing a hero it’s more about being openly sensitive and reacting more. In my case, I feel more comfortable playing the hero now. Maybe because I’m becoming more mellow and relaxed. But there are times when you find a character that displays both good and bad. Like with my character, [Gunner Jensen], in Expendables. He’s a bit crazy, but towards the end of the film he turns out to be not such a bad guy after all.


TCC: Why do you think Arnold Schwarzenegger, Liam Neeson, and Sylvester Stallone still have that box office appeal despite being in their 50’s and 60’s?


DL: Because this group can carry a picture even if they‘re older. I suppose there is a certain need for more mature and experienced tough guys in movies as well. I mean, look at Clint Eastwood. He’s in his 80’s and can still pull off a tough guy role. I think if you stay in shape and current with what’s going on in the film industry and the world in general you could find roles where you can play your own age, like the people you mentioned.


This same concept could be applied in the real world. Who would you pick to command an air craft carrier in the Persian Gulf? You wouldn’t choose a 25-year-old kid even if they are smart, heroic, and well-trained because they don’t the experience to handle that kind of responsibility. That is why men and women in their 50’s and 60’s are given such responsibilities, like leading a nation or being appointed as generals in the military, because of the wisdom and maturity they have learned through their experiences in life.


TCC: Because of your age have you limited what stunts you are able to perform?


DL: Yes, to some extent. When you’re in your 20’s you take more risks because you sometimes want to show off. But as you get older you begin to think twice about taking such risky moves because you just don’t want to go through with facing a possible injury if the stunt doesn’t go as planned.


TCC: You have built a career starring in action films, but have you ever wanted to do drama or maybe star in a comedy?


DL: Yeah, over the past couple of years I’ve thought about that. I think everyone wants to do as much as possible in their career and in life. But in this business you have to be able to sell tickets. I will always do action movies because people want to see me in these types of films. Though starring in a drama or comedy would be a good departure at least.


TCC: Have you already filmed Expendables 3? If so, have any other actions stars joined the cast?


DL: No, Expendables 3 has not yet been filmed. I haven’t even seen a script. As of now I’m doing a TV series called Rescue 3. It’s about a special reaction unit consisting of lifeguards, firefighters, and the California coast guard. I play the leader of one of those units. We’re shooting now for six months. Hopefully, Expendables 3 will begin filming during the fall. I know Wesley Snipes, Jackie Chan, and a couple others are expected to be in the film, but I can’t be certain. It probably won’t be confirmed until a few months from now.


TCC: Who is your favorite action star?


DL: I like the classic tough guys like Sean Connery and Clint Eastwood. They don’t come off as actors but appear as just regular guys that happened to walk onto the set from a real job. There is something appealing about playing these drinking, fighting types of characters that come from a blue collar background. I like those kind of guys ‘cause I’m a little bit like them myself.


TCC: Do people to this day refer to you as Ivan Drago?


DL: Oh yeah, of course. Sometimes when you make a film you never know if the movie or the role you play will make a lasting impression on the audience. But that character Drago certainly did. It’s usually the larger than life characters that people tend to remember the most.


TCC: Have you and Sylvester Stallone ever talked about reprising your role as Drago for another Rocky movie?


DL: Thank god no! (Laughs) I don’t want to get in those trunks again, let me tell you. I’m really happy that I don’t have to. Though I have done sequels for a couple of films I have been in (Expendables and Universal Soldier) I feel when you don’t make a sequel it makes the film more memorable. So I would leave Drago alone. It’s much better that way.


‘Universal Soldier: Day of Reckoning’ is available now on Blu Ray and DVD


Also, be sure to check out Dolph Lundgren’s new action series ‘Rescue 3’ premiering on Tribune stations this fall.