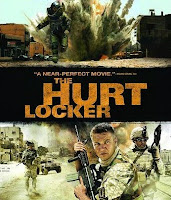 A war movie that critics have labeled 'One of the best films of 2009.'
The Hurt Locker was written by Mark Boal and directed by Kathryn  Bigelow, who also directed such action films as Point Break and  Strange Days.
The independent film was first released in 2008 in Italy. The next year, The Hurt Locker was limitedly released in the U.S. Soon after the film started receiving positive reviews The Hurt Locker got a widespread release on July 24, 2009 and has so far made more than $16 million worldwide.
What makes this film different from other past war films is that it does not follow the same concept of displaying high-octane combat and excessive bloody-violent sequences that are predictably shown in the battlefields of almost every war film. But, rather, The Hurt Locker focuses more on a war tactic that’s been overlooked in past films that being the Explosive Ordnance Disposal unit (bomb squad). The film’s setting is in 2004, during America’s early invasion in Iraq. Sergeant First Class William James, (Jeremy Renner), becomes a team leader of a EOD unit that consists of two other army soldiers: Sergeant JT Sanborn, (Anthony Mackie), and Specialist Owen Eldridge, (Brian Geraghty).
The realistic setting can have viewers on the edge on their seats, as these soldiers are under great pressure to defuse these complex, intricately placed bombs before their “enemies” either try to shoot them and/or detonate the bombs. The movie gives two different perspectives on how these soldiers try to survive while in a hostile environment. Sanborn and Eldridge are used to being overly cautious when completing their missions, but their new team leader James throws caution to the wind, knowing that the risks he takes are a matter of life or death but is not over anxious and just focuses on living life day by day. In one scene James goes so far as to take off his bomb suit when attempting to defuse an explosive device, saying to Eldridge “If I’m gonna die, I want to die comfortable.” At first, Sanborn and Eldridge become threatened by James’ reckless behavior, feeling he is unnecessarily putting their lives in danger too.
The action and suspenseful moments in this film are worthwhile. The incredible acting is realistic with an added touch of drama without being too melodramatic.
Personally, the ending of the film is really good. When James returns home to his wife and baby, he tries to find some form of normalcy in his daily life but mentally is still reflecting about life on base. The difficulty in separating these two lives is evident when James makes conversation with his wife by casually talking about a gruesome event that happened during his mission in Iraq. A few months later, James returns to Iraq to serve another year with his EOD team. It is to no wonder why the beginning of the film stated, “War is a drug.”
Despite some questioning the authenticity of the film, several critics have praised The Hurt Locker. It has won various awards and has even been nominated nine Academy Awards, including Best Picture, Best Actor (Jeremy Renner), and Best Director.
Kathryn Bigelow has definitely set a high standard for other female action-film directors. Hopefully more female directors will embrace this genre in the near future.
Whatever a person’s political views are about the war in Iraq and Afghanistan, and whether or not it is a war that soldiers are dying in vain for; everyone can agree on that soldiers put their lives on the line for the sake of their country. They do their job no matter what and for this you can have nothing but respect for the sacrifices they’ve made. That is what The Hurt Locker portrayed so realistically; a soldier’s perspective on fighting the war in Iraq without any political agenda attached to the film.
The Hurt Locker is rated R and contains war violence and language.
Reviewer's Rating: 4 out of 5
Written by: Bridget Campos
Link: http://thecelebritycafe.com/reviews/hurt-locker-02-25-2010
No comments:

Be Nice (Give It Up Like a Good Girl Should)