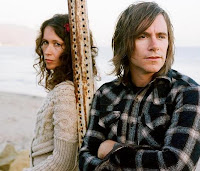 Iconic folk singer, Woody Guthrie, defined the depression-era through the songs he penned and the stories he wrote. As a political activist, his clever outspoken words exposed social injustices and challenged the traditional viewpoint of the American Dream. Guthrie's lyrics set the standard of speaking up for the average Joe and thus redefined the genre of folk music.

Many artists, including legendary singers Bob Dylan, Bruce Springsteen, and Joan Baez praise Guthrie for paving the way for them in their music careers. But Guthrie’s real legacy comes from passing down his musical talent to his children. His son, Arlo Guthrie, better know for the 1967 song, “Alice’s Restaurant Massacree” is considered a legendary folk artist in his own right. Even Woody’s granddaughter, Sarah Lee Guthrie, along side her husband/music partner, Johnny Irion, have built a strong fan base by defining their own musical style of country-rock, while still respecting the Guthrie family’s strong roots to folk music.


Though Woody passed away in the late 60s from a debilitating illness, known as Huntington’s disease, his fans to this day still attend various festivals and museum exhibits each year to commemorate the life and music of the singer/songwriter. For this year, the Guthrie family has come together in a special tour across the U.S in celebration of the centennial year of Woody Guthrie’s birth. TheCelebrityCafe.com spoke with Sarah Lee Guthrie to give us a glimpse of what it is like being part of “folk music royalty.”


TheCelebrityCafe.com: Since the Guthrie Family Reunion tour kicked off last month, how is the tour going along so far?


Sarah Lee Guthrie: It’s going along very well. We actually had a few shows that are close to home (in California), which is really nice. It feels good to get back on the road with the family again.


TCC: Is there anything special your family has done to celebrate Woody Guthrie’s 100th birthday, besides the tour?


SLG: Since we have a big family each member plays at different places, but it’s only Johnny and I that make records and go out on the road. It seems like every festival or event we’ve done this year has celebrated Woody’s 100th birthday. We first started out in Scotland at the Celtic Connections festival. Then we did a show at the Nokia Center featuring Jackson Browne, Crosby & Nash, Tom Morello, and many others. After this family tour, Johnny and I will be going on a six week tour in Germany to celebrate Woody over there. It’s really incredible to see the impact my grandfather has, not only on Americans, but everyone around the world. People are still receptive to the spirit of Woody.


TCC: How does it feel to be born into a legacy that your grandfather has left behind?


SLG: I feel a lot of times like it is really overwhelming. [Laughs] As a third generation singer/songwriter of this family, there are people that have these high expectations of me. As if they want me to be like Woody and in the past I had a tough time with that. But I’m not like my grandfather and I don’t think anyone should expect that from me. However, when I step back and look at the big picture, I feel like I have been blessed with a gift of music and having a grandfather who made such an impact on our culture. So I intend to do the best I can with this gift of mine.


SLG: Though I never met my grandfather, since he died years before I was born, I would listen to stories about him from my dad whenever he would do interviews or talk to the audience during shows. There was this one story when Woody was at a store and there were these black children that came in, and at the counter of this store, drinking sodas, were two Ku Klux Klan members. Woody knew they were such and so he made a big fuss about how beautiful and smart these kids were and was being as loud as he could. The KKK members were so mad at how he was elevating these children that they chased Woody out the store. During that time the war on racism was a big issue. But Woody loved all people and that is why he would poke fun at this racist group. What I admired so much about Woody was the guts he had to stand up to people.


SLG: I have my own way of writing that is different from the both of them. I think if anything I was more inspired by their lifestyles rather than their song writing skills. In fact, I think I am more influenced by Johnny when it comes to song writing. That is one of the reasons why I fell in love with him. He sings beautifully and writes wonderful lyrics. That’s what I admired the most about him when we first met in Los Angeles and started making music together, because during that time I couldn’t do that. But I’ve learned how to over the years.


TCC: How would you describe the music style of you and your husband, Johnny Irions? Is it similar to your family’s musical background?


SLG: Johnny and I are very different and so we make different music. We’ve been influenced by just about every single musical talent such as the Beatles, the Beach Boys, the Rolling Stones, and many others that have come before us. And so here we are in 2012, there are a lot of different things that have evolved over time, including melodies and how music is recorded. It’s a different generation with a different melody. It’s just the way the world has turned.


TCC: A couple of years ago, you released a children’s album, Go Waggaloo, featuring unreleased songs from your grandfather. How did it feel using his lyrics for your album?


SLG: The experience brought me closer to him and his creative process. Woody lyrically works with words so well. By reading his lyrics and the rhythm of them, I anticipated where he might go with the melody. The songs are very traditional sounding because the way the tune goes; they mostly contain three cords and are very simple. So I loved the experience of singing these songs with my kids and they loved it too. It was like sitting down with my grandfather in a way and uncovering a piece of him that nobody has seen before. That was a bit of a revelation for me looking through Woody’s archives.


TCC: Are your children interested in singing? If so, would you like them to carry on the family legacy of folk singing?


SLG: Yes, my five and ten year-old perform on stage with the family and they are amazingly poised. I sometimes can’t believe it. They, as well as my nieces and nephews, are serious about music, but also have fun with it. In fact, my little 10 year-old girl just recently got a real guitar, since she has outgrown her old Harmony toy guitar that we first bought her in Nashville when she was two. Woody would always say, ‘Never get a child that’s serious about music a toy guitar.’ So she now has a beautiful little guitar that was made for her and she loves it.


But I don’t know what musical path my kids plan on taking. My dad never pushed me into having a music career, so I’ll just let them figure it out themselves.


TCC: On your grandfather’s famous song, “This Land is Your Land”, he gave permission for anybody to use that song regardless of the risk of copyright infringement. Lately, quite a number of people are quick to sue artists for sampling their music w/o permission, or even accusing them of stealing their song because the melody sounds remotely like something they created. What do you think about this?


SLG: I think that is totally absurd! [Laughs] I don’t think melodies belong to anyone. In Woody’s case he never made a penny in his life, so it didn’t matter to him whether people copied his music or not. He just wanted to get the song out there and have people sing it no matter what. If you look back in the beginning of recorded music, it has only been around for more than a hundred years. Before that time people were for generations after generations singing melodies that didn’t belong to anyone and nobody got paid for it. I tend to think that as far as folk music goes it is a melody that belongs to the people. When I write a song I don’t expect to keep it. It is not my song to keep. Woody believed that too. He copied music all the time. That is what you did with folk music. You copy old melodies, and then you put new music to it, then you evolve it and then change into something else. In fact, there is a great quote from Woody. He said, ‘I never made an original melody on purpose.’


I think the music industry started booming around the 50s and through the 70s. It changed a lot about how we think about music or at least used to think about it. For me, music is so much more than a paycheck or a copyright that you can sue people for something you think is yours. It has the power beyond what we think it does. Music is magical because it moves people and at times can help them cope with life.


For more information on the life and music career of Woody Guthrie, please go to his official website at: www.WoodyGuthrie.org